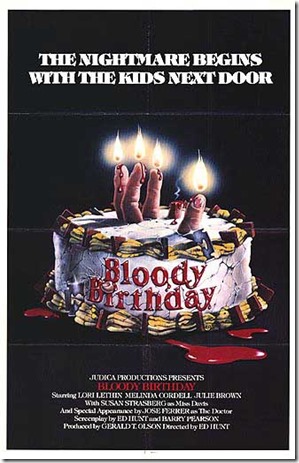 And the winner of the Most Cynical Attitude Towards Children Award goes to… Mr. Ed Hunt! Come up here! Take a bow! Wow. Simply, wowzers. Bloody Birthday is a triumph all right. Not only does it pack in all of the tosh we expect of slashers from the Eighties (death, breasts and bad dialogue), but it turns the genre upside down by making the killer a *SPOILER* murderous triad of preteens. What’s their motive? Honestly, I have no idea. Not a clue. Being taken to the dentist against their will. Or not being bought a car once they’d slid out of the womb. It is America, after all.

One of the group, an All-American Cutie by most preening mom’s standards, charges her gang 25 cents to view her sister through a hole in her closet dancing topless in her bedroom, cavorting with a fat-haired jock and later shoots an arrow into her eye and dumps her body by the bins for the men to collect in the morning. Does she find any of this harrowing? Not at all: the film ends with her dropping an entire truck on the poor sod who was lying underneath trying to fix it.

What surprised me about the film was the way that the children were portrayed; as soulless, cold-hearted murderers that don’t react in any way to the horrific things they’re doing to their friends, family and neighbours. It’s demented, unapologetic, harrowing and ridiculous, all good reasons for watching it. 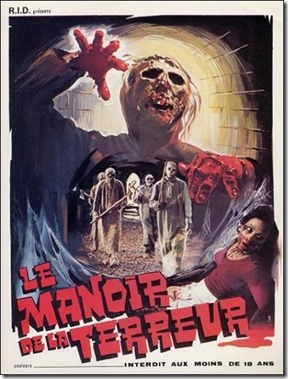 Made for £100 by the 13-year old Andrea Bianachi and written by his 6-year old brother Piero Rignoli, The Night of Terror (or Burial Ground) is a zombie film so bad, I can’t imagine what the backers said when they saw the first cut. They probably gouged their own eyes out screaming “WHY”. There’s nothing to recommend it other than a hilarious self-conscious sex scene featuring a densely pubic back going hell for leather on top of a crudely dubbed MILF. I’m sure the producers of Resident Evil found inspiration here: the zombies are hungover extras and the knackered-looking mansion looks pretty grim. However, the title is garbage: the majority of the “terror” occurs in broad daylight and couldn’t even give Tom Baker Doctor Who episodes a run for their money.