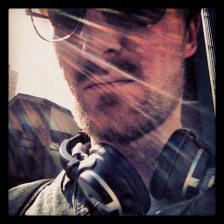 He’s one of the three authors of 500 ESSENTIAL CULT MOVIES (Ilex Press). He nearly died trying to sit through hundreds of films in a six-week period with only a pot of houmous and Kettle Chips for nourishment.

In his spare time, he plays guitar in AMY BLUE and A THOUSAND KNIVES, and has climbed Mt. Fuji without carking it.